Giant slingshot made from 2" PVC. Cement insufficient. How to fasten for load?

I have an Angry Birds birthday party and the honor fell to me to create the giant slingshot. 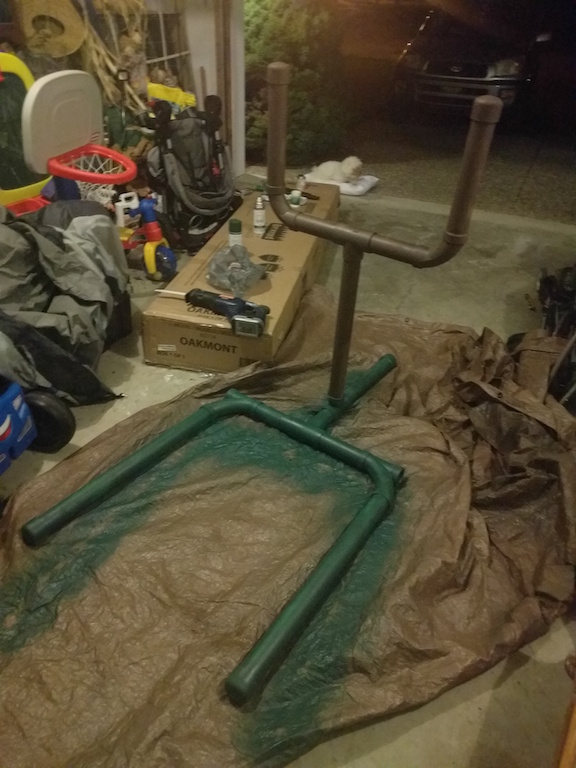 Here are some more pictures for your pleasure or entertainment (because I may, in fact, be an idiot).

So I have some sections coming from the back to stabilize it and a piece off the front. I think those are fine. But I pulled back on it a little and the vertical piece came unglued from both the bottom and the top "T" sections.

Now I have lost confidence in the 90 degree elbows as well.

How should I fasten this?

I immediately think of drilling and bolting it but I'm concerned about cracking the pipe. Then I read about a better adhesive I could try called E 6000.

Also the adhesive site thistothat.com mentions a thing called LePage's 5 Minute Epoxy. Anybody have experience with that?

I need major help! What should I do? Any advice appreciated.

Also: ability to hold water is not of interest to me, obviously (I hope).

I will be removing and re-gluing/replacing some of these with primer and repainting but here is the big idea: 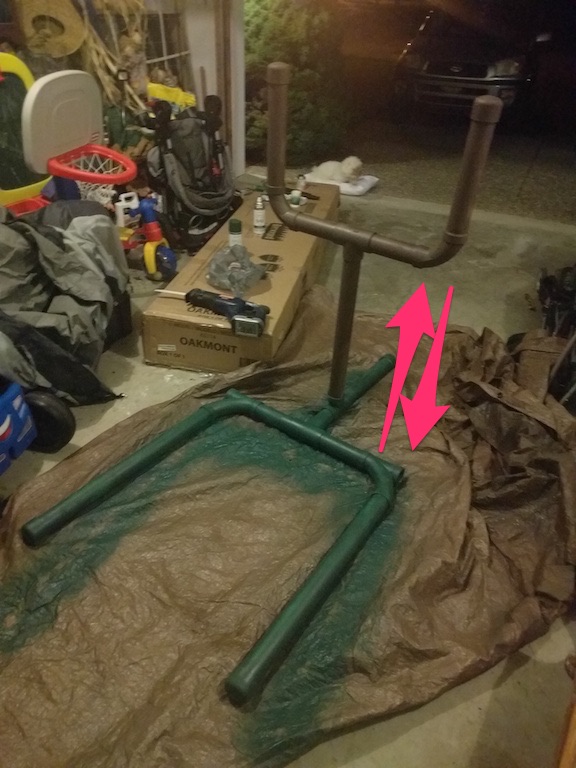 I swap these pieces. I make the opening pointing down. Then I drive these stakes in the ground and position the slingshot so that the stakes poke up there into these holes. At least 2' of stake will go up the arms. This should be enough to reinforce while still keeping the look.

Key lesson learned: Leave time for testing. So my goal was to launch lightweight playground balls from the slingshot into boxes, using a colander as the thing to hold the balls and BigBands (like the kind used to secure the can liner in a garbage can) for the power.

So because the launcher was being used in an already muddy area the homeowner (mother-in-law) did not want the stakes. So Me and another family member braced against the post. The glue may have held but the creaking sounds that the pipes gave, made me uneasy about the pipes surviving the tension. I will test with the stakes in my own yard.

Another problem was the colander with drawer handle was cracked and didn't survive the first three launches. The back up colander was a close fit to the balls so that when pulled on it "ovaled" enough to keep the balls from launching.

The thing was a success in the end because we added a hand towel over the top of the colander, which made the pocket more shallow. It was harder to keep the balls from rolling out but it worked!

Also instead of piggies we used real children to bring down the boxes on. It was their idea and all the boxes were empty. So no tears there.

I am marking the first answer as correct because, well it was true. And thank you for all your suggestions. If I had it to do over again I would start with something that looked more like a soccer goal launching the balls up and through the area where the ball would be kicked in soccer. It wouldn't look as "Angry Birdy" but when you can't anchor your base into the ground it's a better approach. Also it could be used indoors for church events ect.

I hate to be the bearer of bad news but 2" PVC will not handle the stress that a working slingshot goes through. The best fix for what you have would be under the comment Aloysius D mentioned about joining the top to the bottom with 45 degree braces. I think it would still want to roll backwards on you on the draw to use it. That's when it will fail at the joints where the vertical meets the base. The joint will be in tension as compared to rolling out of the tee connectors when there are no braces.

A good old fashioned tree limb in the shape you need bolted to a base and braced might be better, at least cheaper than one made of 2" threaded metal pipe.

You don't necessarily need 45 degree pipe -- you might be able to reinforce it enough with guy wires.

It would be better if the base were an 'H' shape, so that you could go from each corner of the base up to where the rubber tubing would be attached. What what you have currently, you might still be able to get away attaching two from each upright to the bottom of the 'Y' base, and one each to the top. Because of how the guy lines would obstruct, you'd likely have to have the top of the Y be towards that target.

Not the answer you're looking for? Browse other questions tagged adhesives pvc props or ask your own question.

17
Making thin brittle sand design that holds together
3
How to attach PVC piping to a flat surface
4
Glue/Stick printed labels/stickers onto fabric
7
Lickable glue for handmade envelopes (gum arabic)
5
What is the best way to apply felt to wood?
3
Mostly Off-the-Shelf (or at least quite easily fabricated) Rounded Square Tubing?
3
I need a glue that won't turn opaque or run
2
How can I make molded fake dirt?
2
Solutions or suggestions for removing and preserving label from canned good?
3
Which material should I use to fix broken glazed ceramic lamp?