When I travel, I like to walk around, collect some natural objects (shells, coconuts, leafs, etc.) and put them together to produce some kind of "sculpture". I always have in mind that the object should be as much biodegradable and natural as possible. So, to stick stuff together I use some wax (it has also the big advantage that candles can be found more or less everywhere). However, it is difficult to get a neat result because 1) it isn't very strong and 2) it's hard to canalize.

What are alternative adhesives for such projects?

Some examples made in India: 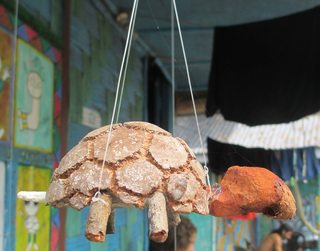 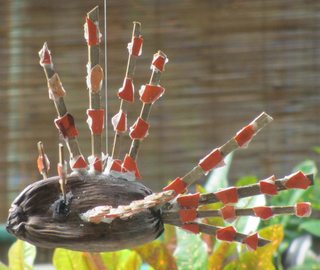 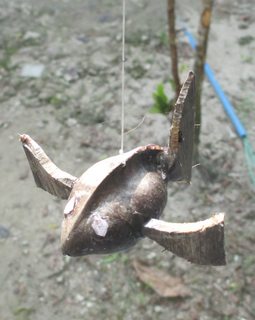 Taking "India" into account, you could surely find jackfruit or mango tree. I would suggest you could use the white sticky latex of jackfruit/ green mango. While eating, I find extreme difficulty in removing the gum like plant excreta from hands, I am sure it would work as a mantra as far as natural gum is concerned.

Secondly, in Indian villages you could see loads of mud house decorated with cow dung. Natives throw the just released cow dung to the mud wall even half roasted bricks wall to dry them. So that later on, they could easily take it from there, break it and use it as fuel. As it has a sticky power, I believe it could easily stick with something. If you're joining two halves of coconut shell, use the just released cow dung and symmetrically spread it over the edge. Then simply put the other one over that and let it rest. It will work as a very natural adhesive.

Depending on what you read PVA glues (usually what you see as white or yellow glues) are considered biodegradable. Elmer's is mentioned in this conversation but I didn't find anything official from the manufacturer claiming it as biodegradable. It should break down in water but PVA glue is based on a synthetic petroleum based polymer so likely this isn't exactly what your going for

[S]hould be as much biodegradable and natural as possible

Choice of words leads me to believe you are looking for something else anyway so I would like to introduce you to hide/animal glue. The names are considered synonyms where this glue is concerned.

Hide glue is an adhesive made out of the connective tissues, bones and hides of animals

It is one of the earliest known glues in existence. Today it is predominately used in wood working but does have other applications.

In France, there is proof the Neanderthal used glue in their paint so that the cave paintings were protected somewhat from moisture. Animal glues from things like horse teeth can be dated back 6000 years.

Note all hide glues are the same. There are hot and liquid versions and many individual variations sold commercially. I am speaking more of the hot glues that are sold as pellets and you have to melt them before use (Some liquids are mixed with other substances. Not all are except from your criteria though). Hide glue has a good set of features and some drawbacks depending on how your application

Number one being that it is non-toxic. It is a forgiving glue as you can reheat it once it has set to move or adjust what you are making or repairing in some cases. Since it is made from animal proprieties it is biodegradable. Its sets rather quickly which can be both a pro and a con. One major draw back is that it is water soluble and affected by humidity so this is not for outdoor use which may be a draw back here given your pictures. Some also have an off putting odor but that can be very subjective.

Hide glues is a rather engrossing subject and we are only glazing the surface here but I thought it was good enough to at least suggest. You can read more about its use in wood working (mostly to understand the process) you can read more at LeeValley. There is also a manufacturer that praises itself on its eco-friendly hide glues.

Resins obtained from pine trees etc can be effective adhesives. There are many recipes but most involve heating to melt the resin and adding powdered charcoal to stabilise it. Waxes, fats and solvents can also be added to modify its properties.

There are also lots of natural gums and resins with various different properties which have at various times been used as adhesives, binders etc.

Another variation is shellac which is reasonably widely available. Again it can be compounded with powders and waxes to various plastic-like materials and can be dissolved in alcohol to make a varnish or sealant.

As already mentioned natural latex is a fairly effective adhesive.

Not the answer you're looking for? Browse other questions tagged material-selection adhesives .

2
Which adhesives work well when gluing vinyl to plastic?