What steps do I take to prepare a plaster block?

In school, I once made a subtractive sculpture from a plaster block. Actually, the block was in the shape of the large yogurt container it set up in (about 4 inches in diameter at the top, at least 4 inches tall).

I used knives and files to slowly make an abstract sculpture that I really loved, but the preparation for the plaster was done completely by the instructor.

I did some searching on plaster, but the mixing information was generally about creating plaster to put on something else to create a mold. It wasn't about simply creating a piece to carve from. I'm not sure of search terms to use to narrow it down.

Should I just mix the entire thing in the container I want to use for the block shape? Do I mix it in a larger container and then pour it into the final one? Do I add less water since I won't be pouring it over an object?

Here's an example of what I'd like to be able to do again. Although my block started quite large, I made this quite small piece: 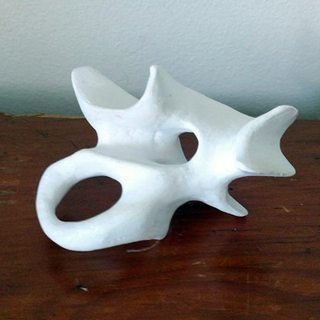 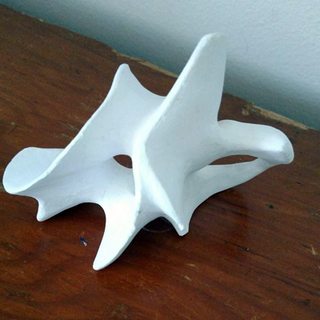 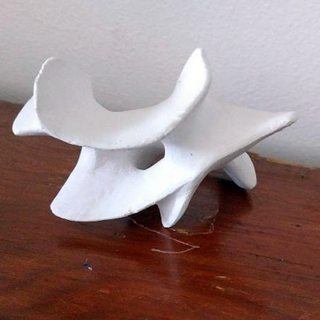 The first thing to bear in mind is that different grades of plaster have different properties. They can broadly be divided into (harder) alpha plasters and (softer) beta plasters. Obviously for carving there is a compromise between how easy it will be to work and how strong the finished article will be. A softer plaster will obviously be easier to carve but a harder one will allow you to create finer detail and be stronger overall.

there is also a large rage of specific formulations in between hard and soft. Specifically Herculite may be a good compromise for carving.

It is important to use the correct ratio of water to plaster, follow the manufacturers instructions and take the time to measure out the quantities accurately. You can also get various polymer additives which strengthen the plaster further.

Be aware that mixing even quite small quantities of plaster can be a messy business. It's not especially hazardous, but as with any fine dust avoid breathing it in too much and prolonged exposure can dry out your skin a bit.

It is a good idea to keep a bucket of water handy for washing utensils as plaster in an excellent way to block a sink. Rubber mixing bowls can easily be cleaned by knocking the plaster out, rigid containers are much harder to clean.

If you sieve the plaster before you mix it that will help to prevent any lumps in the mix. It's usually easiest to mix moderate quantities by hand as this allows you to feel any lumps, wear rubber gloves if you wish. Hand mixing also tends to introduce less air. Make sure that your mixing bowl is thoroughly clean, any traces of set plaster in the mix can cause lumps and hard spots in your casting.

It is probably best to mix it in a separate container from the one you mould it in as you will get a neater mould. Try to make up the correct amount as pouring a new batch onto setting plaster can cause problems. Once the mould is poured and before it sets gentry tap it a few times to help release any bubbles.

As well as casting into a mould you can let the plaster set a bit and then mould it by hand like clay. A few minutes after mixing it goes from a fluid to something a bit like soft cheese. At this point it will hold a shape reasonably well and can be formed into shapes without needing a mould. You do need to work quickly as you will only have a few minutes before it sets.

12
Is there a kid-safe carving material?
6
Why is my dyed plaster losing its color?

6
What type of paint works well on plaster?
3
What are some good tools to use for carving plaster?
6
How can I repair a plaster sculpture?
2
Hydrocal/Ultracal (plaster) alternative in Europe
6
Can you take a regular photo and Mod Podge it to Plaster?
4
What type of plaster should I choose for a block-carved plaster sculpture?
3
mixing cement with plaster?
5
Advice on using old plaster
3
Making a Custom-Shape Pillow for Back Sleeping