Pencils seem to have different types: 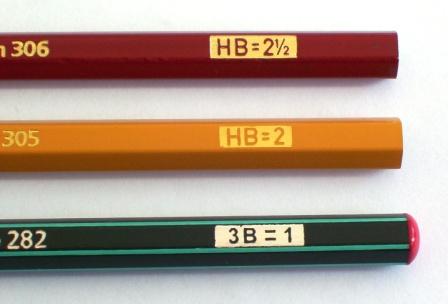 From what I've seen, there's a few types:

H and B relate to the hardness or softness of the pencil's graphite. "H" stands for "hard" and "B" stands for "black" with "F" right in the middle between HB and H... though, the source of the lettering seems to be debatable according to Wikipedia - H stands for "Hardtmuth" (the surname of the owner of an art supply company) and B stands for "Budweis", the town the pencil company was relocated to but "hard" and "black" are probably more useful to remember.

A "number 2 pencil" as we (in the US) are often told to use for filling out multiple choice answers on Scantron sheets, is right in the middle, the equivalent of "HB"... though, according to this site, there's no "industry standard" so one company's HB may not be the same as another's. This is also explained in the Wikipedia article linked above, which notes that on some scales, the US equivalent of HB is a #2 pencil, while other manufacturers use the equivalent HB=2½.

As a general explanation of the differences between the grades, pencils.com shows the following image:

This site has some great guidance on what the benefits of each are:

H leads are extremely smudge-resistant and give cleaner lines, making them useful for things such as outlines, technical drawings, light sketches, and even watercolors. Left-handed pencil users can also take advantage of smudge-resistant H leads. On the downside, hard leads tend to be scratchy, especially as you move up the scale.

B leads are smooth to write and draw with. They smudge easily, but are readily erased. They're perfect for pencil drawings as artists can take advantage of the brush-like expressions, especially in the higher B grades. Animators in particular enjoy using 10B over animator paper because it writes like butter, creating nice, quick, heavy lines with no friction.

(This answer is partly based on product information from Faber-Castell; thus, it may not be without bias.)

The wood-cased pencil was invented following the discovery of a large graphite deposit in Borrowdale, England in 1564. The substance was so soft and brittle that it required a holder. (Originally, the grey metallic-sheened substance was thought to be a form of lead ore. Hence, the words for ‘pencil’ in several languages literally mean ‘lead pen’. It was not until 1789 that the chemist Carl Wilhelm Scheele proved that graphite and lead sulfide were two different minerals, and the geologist Abraham Gottlob Werner coined the name graphite, which stems from ‘gráphein’, meaning ‘to write’ or ‘to draw’ in Greek.)

When the supply of natural graphite from Borrowdale ran short, the graphite was thinned down with other materials. In 1794, Nicholas-Jaques Conté and Joseph Hardtmuth independently discovered almost at the same time that by mixing graphite with clay it was possible to produce leads with different degrees of hardness, which would preserve the graphite deposits and also accommodate a variety of applications.

The graphite-clay mixing process was improved by Lothar von Faber in 1839. It was at that time that the hardness grade scale was established. Today, the scale encompasses 17 grades of hardness: 8B–B, HB, F, H–7H.

According to Ullmann’s Encyclopedia of Industrial Chemistry, the clay content varies from 15 % in the softest lead to ca. 60 % in the hardest. A mixture of about 2 parts of graphite and 1 part of clay gives the usual HB or 2 1/2 degrees of hardness.

The following image is adapted from product information for the Castell 9000, which is available in 16 degrees of hardness:

The same scale of hardness is used in ISO standards (for example for the determination of film hardness of paints by pencil test; in this test method, calibrated pencils of known hardness are pushed over the film). The hardness scale in use in the United States employs only numbers. The most important grades in the two scales approximately have the following relationship:

Not the answer you're looking for? Browse other questions tagged pencils or ask your own question.

11
Which kind of pencils should be used by a beginner for drawing?

5
How do hard, soft, and medium charcoal pencils compare against their counterparts in graphite?
5
What are the types of charcoal pencils and how do they differ from each other?
9
Do I need a non-photo blue pencil for scanning drawings?
11
Which kind of pencils should be used by a beginner for drawing?
19
How can I make a sketch under a watercolour painting and have it not be seen?
8
What exactly are carbon pencils?
2
The differences between masculine and feminine features to improve my portraits
2
Desk Pencil Sharpener - what's the purpose of the feeding arm?
3
Is it possible that the wood used in newer pencils could be a bit better than old ones from same series? Or wood could degrade with time?