How can I draw a horizontal line on a spherical object?

I have made this jar using plaster: 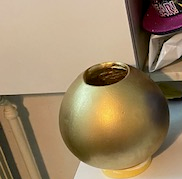 I painted it with plastic white paint as a base, and then applied this gold metallic paint.

Now I want to paint some horizontal brown lines using oil-based brown paint and a small brush, but I need some ideas and help on how I can get (a) perfect horizontal line(s).

Is there another method to do so?
Or are there any online stencils that I can order which can help me in doing what I want?

Build a structure from common materials, i.e., books, blocks of wood, etc., at the height necessary to match your objective line. You can use a pencil secured to the structure, making contact with the pot, rotating manually the pot, scribing each line as required.

At that point, you can trust your steady hand, or use the line to apply masking tape.

You may be able to use vehicle pinstripe tape, as it is stretchy for the purpose of following vehicle body panel curves and distortions. Vehicle pinstripe tape would be applied along the pencil lines, providing the masking you desire, to restrict your paint lines.

It's a modification of Triplefault's method (from Home Improvement SE) with fewer materials and purchase expenses.

A globe-shaped object is hard to create a stencil for because it curves in two directions. To have access to the painting surface, the stencil shape would be a cylinder.

If you make the stencil from tape, it can be difficult to position it because only the very edge of the tape can form a cylinder; if any other part of the tape grabs the surface while you're positioning it, the tape won't form a clean, uniform circle around the object. Once the edge is pefectly in place, the rest of the tape can by crumpled against the object. Tape also runs the risk of pulling paint off the surface if the paint isn't well adhered or the surface is weak.

Vehicle pinstriping tape is suggested in fred_dot_u's answer. That is stretchy so it can conform to a 3D surface. But the adhesive is designed for automotive paint, which is very tough stuff, adhered to a tough surface. You would want to experiment with it, or any tape, on painted plaster.

My suggestion is to use a rigid cylinder that isn't adhered to the object where that will work, or tacky putty. The tacky putty I'm referring to is a putty that sticks non-aggressively to a surface and is designed to not stain or damage the surface. There are various such products sold to stick light-weight objects, like photos, temporarily to painted walls, or to seal weatherproofing film to painted walls. Some of these putties can leave a stain if left in place for a long time, so you would want to test the product in an inconspicuous place (I haven't recently used any, so can't make a specific recommendation).

You can use the tacky putty in combination with a rigid cylinder to create a mask (position the cylinder, then press a band of putty against the cylinder edge to create the stencil edge, then remove the cylinder), but you could also use it with the kind of setup described in fred_dot_u's answer, where you would press a band of putty around the object, then use a knife in that setup to precisely cut it for the edge of the stencil, and peel off the putty in the painting area.

With a rigid cylinder or tape, use thick paint so it doesn't wick.

Measure the diameter at the top and bottom of the area where you want a paint band. Make a cylinder of each diameter from sheet material with enough strength to support the weight of the piece, like cardstock. Ensure that you start with material that has a straight, clean edge. 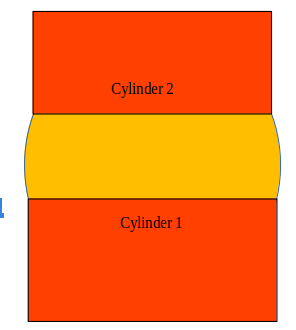 If the band will be entirely north or south of the "equator", position the larger cylinder, and use its edge as a guide for applying the putty (or painter's tape). Remove the cylinder and then support the piece on the smaller cylinder so it acts as a stencil. The image below shows the putty/tape and cylinder at the top, but you can flip it upside-down so the cylinder acts like a stand. 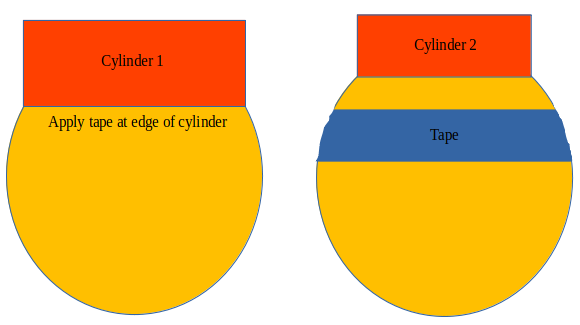 Note in the diagram that when you need to use tape, the edge you want perfect is on a smaller diameter than the other edge of the tape, so it's almost impossible to lay down tape perfectly. Using putty solves this problem.

As Elmy notes in a comment, you need a method to ensure that the cylinders and object are accurated aligned horizontally, like using a level. You also need to be careful to keep the positioning secure so nothing shifts while you're painting.

If you are concerned that any form of tape or putty might damage the gold, and don't want to risk trying to touch it up, here's a last resort method to safely mask. Wrap the piece tightly in plastic wrap. Then apply painters tape tightly in the area and vicinity of where the band will be, overlapping where the edge will be.

Measure the diameter after it's wrapped to make the cylinder. Use the cylinder to identify where the edge of the band will be, and cut the wrapping with a knife (if that creates a groove in the plaster, it will be filled with paint). Remove the wrapping from the side you will paint, and use the smaller cylinder to complete the stencil. The painters tape will peel off the plastic film to remove the mask.

Put the project in the middle of a lazy susan.

Build a structure on the table to hold the brush at the right height this could be your hands and arms, but I'm envisioning books or blocks of wood to improve the repeatability

Put the brush against the project

Not the answer you're looking for? Browse other questions tagged painting technique-selection .

8
How can I do my Poké Ball decreases so they appear tighter?
6
How can I make a peeling paint effect?
6
Painting a flag without paint bleeding
4
How can I convert a stick pin badge to a butterfly clasp?
8
How can I make egg-tempera that doesn't deteriorate?
3
Acrylics and model building: is a gloss layer a must-have before line detailing and washing?
3
How to do embroidery on tulle netting fabric?
1
How can I speed up the curing process of Mod Podge?
2
Which roller is best for applying paint to a plaster jar?