I am looking into polishing 3D printed models to a high shine after sanding up to 3000 grit. I am currently trying a rotary tool but it is small and would like something more stable.

I have seen some jeweler's polishers but they are usually rated at a high RPM. Due to the lower melting point of the plastic, I need something with a lower RPM around 1000 RPM.

Ideally, I'm looking for a unit that uses 3-inch buffing/polishing wheels. Are there any particular brands of bench buffer/polishers that can run at a low RPM?

I've polished about a dozen 3D printed models, some ABS, some PLA. It's possible to get a near mirror finish, very reflective with ordinary wet/dry sandpaper and also with Micromesh™.

You're correct to be concerned about the low melting point of the plastic. This is why one uses a polishing material along with water, to carry away the abraded material and to keep the surface cool.

The Micromesh™ I use has a figure of 12000, although that is accompanied by a caution that the numbers are not comparable to conventional sandpaper.

I've found a device that (barely) shows a variable speed polisher on Amazon: 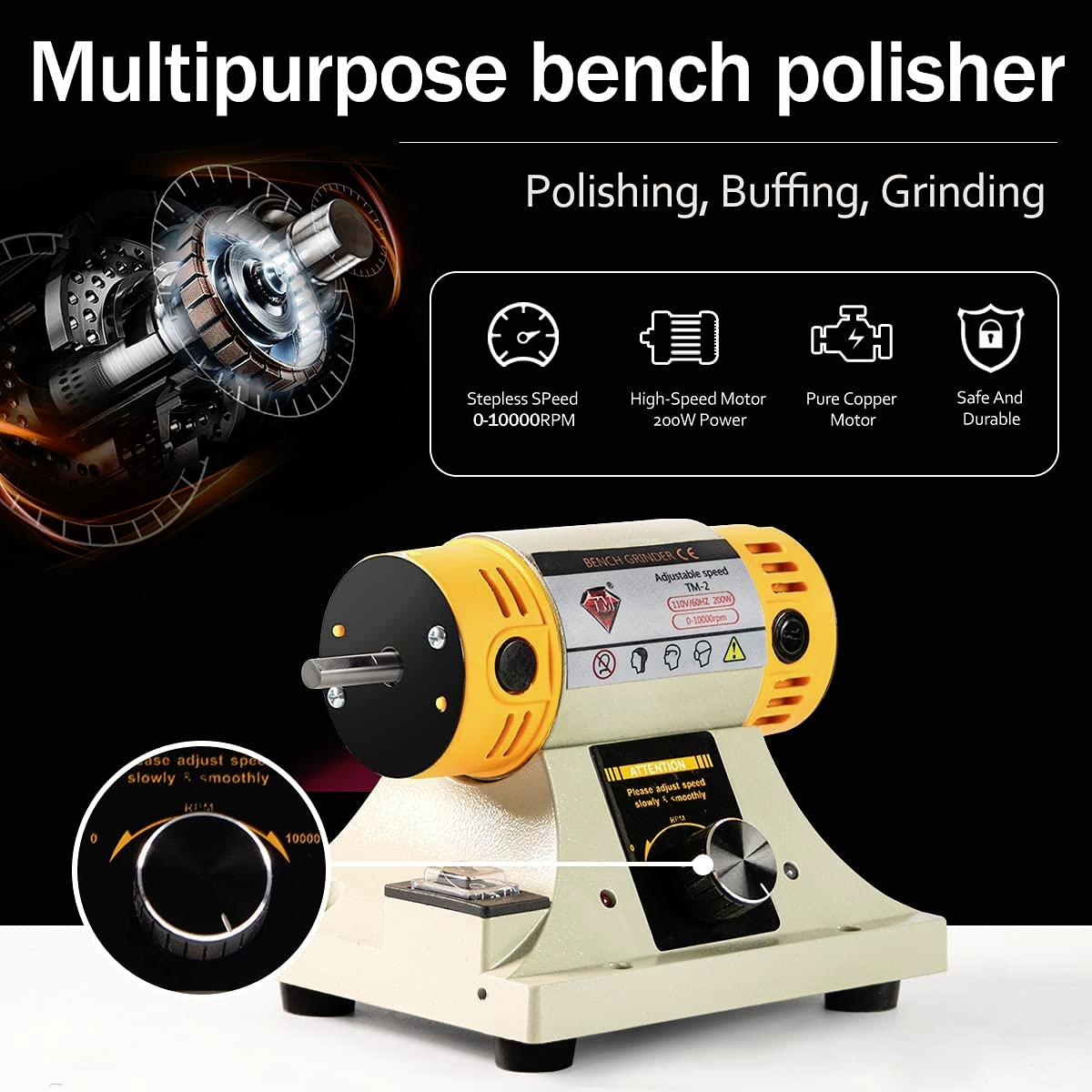 This image is courtesy of the linked site. This image shows a zero to ten thousand rpm variable speed, but this image is the only reference I can find for the speed.

Additionally, the question/answer section specifies that it should be operated dry, which excludes the cooling effect of a system which allows a water flow. One could argue that the extension handle could be used with water, as it places the activity away from electrical components.

One of the videos from the linked site shows the machine being switched on, and it appears that the zero portion of zero to ten thousand changes the speed from zero (off) to some arbitrary higher speed. A useful speed control would allow gradual ramp-up to reach a speed suitable for polishing plastic in the manner you seek. Perhaps a question via the Amazon facility would provide a clarification.

I've been unable to locate any true wet/dry equivalent in the hobby/non-commercial product line. The tools in the commercial field are aimed for countertop sized work and larger.

Not the answer you're looking for? Browse other questions tagged tool-selection or ask your own question.

5
What is a proper tool for papercutting?
6
Looking for a (non-yellowy) white chalk pencil for marker illustration highlights
2
What do those material measurement metrics for a drill represent?
4
Machine shear for cardboard?
8
Economical ideas for lettered t-shirts
9
How can I cut a near perfect circle out of a plastic bottle?
7
Tool for sealing paper ends
2
Affordable micromotor for jewelry