How do I extend the length of a plaid, wool maxi skirt?

If this was lighter material, I can simply sew on a lace trim, but this is winter wool maxi skirt.

Wish to extend an inch. 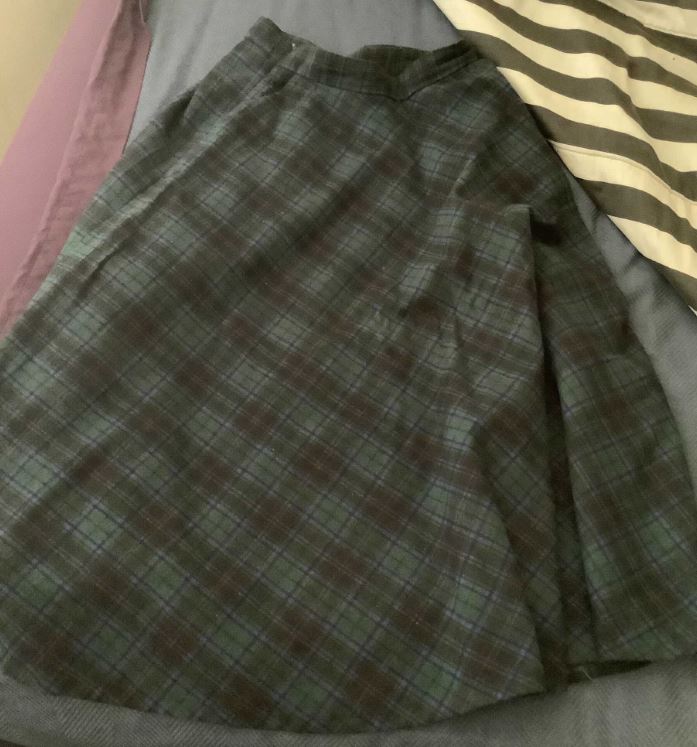 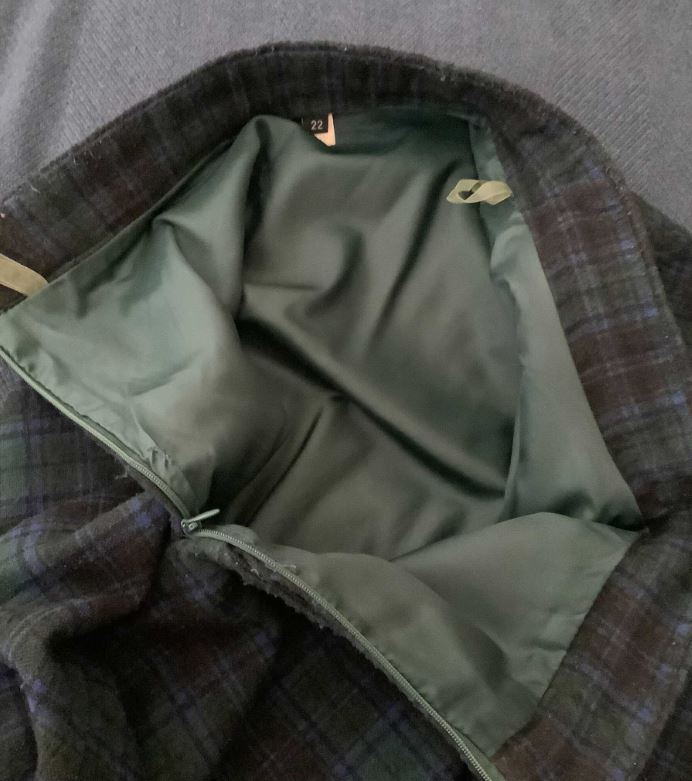 In theory it would be ideal to have the same fabric with the same pattern, but this looks like a circle skirt. Even if you got a piece of the same fabric, you wouldn't be able to match the pattern at the bottom without cutting many, many small pieces and sewing them together again. The resulting extension would most likely look odd. That leaves only a deliberate misalignment of the patterns.

A better idea is to buy a woolen fabric in one of the darker colors seen in the stripes. That repetition of colors results in a very harmonic look.

Alternatively, you could opt for black or a similar neutral color. In that case, it's a good idea to add that color in several places - for example at the waist band and at the bottom of the skirt - to harmonize the look.

Be careful when manipulating the waist band or you'll have to reset the zipper. Another idea to add a splash of color is to unpick the outer seam of the waist band and add piping between the skirt and the waist band.

In my personal opinion, this is the easiest and most promising solution. It also requires the least knowledge about sewing.

You should find a fabric that has the same or less weight than the wool of the skirt. Very heavy fabrics will be harder to sew and won't look as pretty.

The advantage of this method is that you can calculate the material requirements very easily.

This is more complicated because you actually have to cut ring shapes for the fabric to lay straight in the finished skirt. You also have to deal with the lining of the skirt, so I'll assume more sewing experience than for the ruffle.

This method may sound like it requires less material, but that's deceiving. You'll probably need as much fabric as for the ruffle because you have to cut curves out of rectangular fabric. You'll also have a lot of cut-off that's too small to be useful for anything.

This is just listed for completeness, it won't reach your goal.

This is by far the most complicated solution, because you'll have to move or extend the zipper. You need to replace the original waist band, because the fabric is more worn on the inside. Even if you unpick the existing waist band and use all existing fabric on the outside, you'll always be able to see where it was creased originally.

Take the zipper out. Now, widen the skirt slightly in that upper portion. One of the former zipper seam allowances will become an underlay, and the other will be an folded overlay. You can use hook and eye closures instead of a zipper. You'll probably need to extend both the underlay and the overlay by attaching a band of cloth or a grosgrain ribbon. This should be chosen to be of a similar color. The band or ribbon doesn't have to match the skirt color exactly, because it won't actually show when you're wearing the skirt. Some interfacing would help stabilize things.

Actually I don't use a metal eye in this situation -- I do use a very small metal hook from the hook and eye package, but then I create a quasi-eye out of thread. For each "eye," you need at least six threads and you should make sure the overlapping stitches are uniform in length and tension. You might think the loop should sit a little loose on the fabric, but you should resist this temptation. Actually such an "eye" will work better if there's no looseness or tightness.

This thread eye works better than a metal eye because there's less bulk. Also, to accommodate slight fluctuations in your measurement at the waist and upper hip, you can make TWO rows of thread eyes, and then choose whichever row is more comfortable on any given day.

To help you understand this proposal, imagine putting on a skirt with a waistband, which is a bit big on you.

If the zipper seam allowances weren't generous enough to allow the skirt to sit one inch lower than before, you can add a bit more circumference by letting the skirt out a bit at the other side seam.

You can make the former waistband fit through the upper hip area better by tapering it a bit wherever the skirt originally had a seam. (With this A-line skirt I suspect there were only two vertical seams -- but maybe three....)

When you're doing any pressing (with the iron), be careful to protect the skirt fabric with a pressing cloth because of the wool. To eliminate a former crisp folded edge, put a damp washcloth (clean) between the skirt fabric and the pressing cloth. You may also spray a bit of water on the crease you're trying to get rid of.

You could leave the skirt unaltered and wear it with a white cotton petticoat that is one inch longer than the skirt so it peeks out from underneath. The petticoat should have a nice scalloped edging at the bottom. These edgings are sold by the yard. You could attach this straight to the bottom of the petticoat or you could gather it depending on the look you prefer. Gathering would make it look more purposeful so that might be an advantage. To understand this idea, think back to the crinoline petticoats of the 60's (still used to this day for square dance outfits).

It's a bit anachronistic in an A-line plaid wool skirt but it could be a fun solution. I wouldn't use a dark color because then it would look like an unfortunate accident (as though the skirt shrank but the lining didn't). The reason this approach would work is that the petticoat will only have one inch sticking out below.

Not the answer you're looking for? Browse other questions tagged clothing technique-selection wool .

7
How can I splice the tail of my tie and have it not look terrible?
9
How can I trace a pattern from a top with darts?
5
How can I attach a large satin applique to a skirt?
6
Efficient cutting and preparation of fabric for sewing clothing
5
Creative embroidery technique to fix a damaged knitted sleeve
4
How to make adjustments to a PVC raincoat?
3
I am trying to identify / describe this wool thread / yarn
2
How to mold outer shoe sole to the shape of my feet without using a last?
3
How do I attach frilly extension of skirt using a sewing machine WITHOUT the thread appearing on the front of the skirt?
4
How do I rescue a skirt that I attempted to lengthen but now has a very wavy hem?