How do you make a Noteboard? 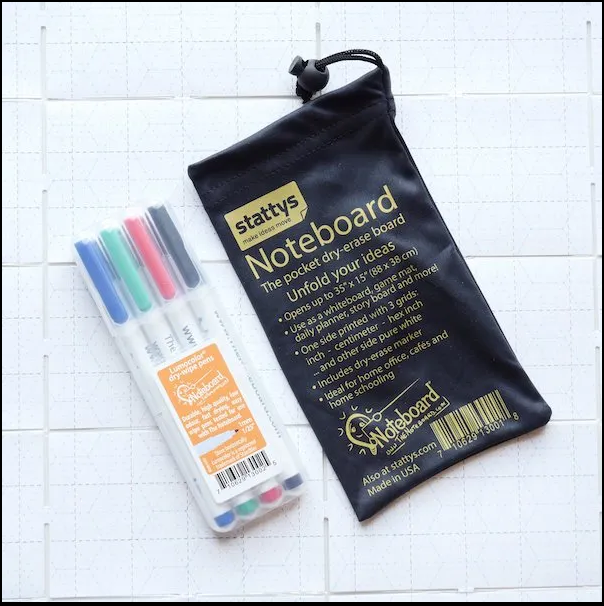 It is a whiteboard that folds to pocket size. The image shows what's sold as a bundle of the whiteboard in the background plus a carrying pouch and some dry-erase markers. The whiteboard is 35" x 15" and folds to 3" x 5" size to carry around. That's the part I want to make.

It seems straightforward enough. If I had to guess, the basic structure is some sort of laminated and cut paper.

As I see it, there are three main moving parts to the challenge (metaphorically speaking):

From the picture, it looks like a lamination. It is probably cardstock with a very thin lamination layer on each side. The cardstock is die cut from a full-size sheet, separating each rectangle except for an area in the middle horizontally and vertically to keep the rectangles aligned.

The lamination layers are probably embossed on the folds to help seal the layers to each other in the gaps between the rectangles, and to make them thinner and flexible on the folds. The surface isn't likely flat everywhere, there are probably grooves at the folds.

This kind of construction wouldn't be difficult with commercial equipment, but you would have a hard time replicating it the exact same way at home. But if you have access to some tools and are willing to put in a lot of time, you could produce something similar.

To make one large board, you would need a roll laminator. That's also the only practical way to handle the very thin lamination film that would facilitate folding. You might be able to get a library, school, or printshop to do that for you.

You could tape together 3"x5" cards to maintain the alignment for laminating, using a small piece of tape in the middle of each side. But you need to consider the type of tape. Most normal clear tapes and their adhesives won't do well in the heat of a lamination machine.

You might be able to use something like small rectangles of thin paper (to avoid creating a ridge in the lamination), like wrapping tissue, and a glue stick in that area on the card edges. You don't need a lot of strength or longevity, just something thin to maintain alignment for lamination that won't shrink, melt, ooze, or discolor. It will also be much easier to fold if most of the gap between the cards is empty, so use the shortest practical pieces to join the cards.

An alternative would be to get a large piece of cardstock and cut out the slots between the rectangles, leaving a small area on each side to maintain alignment. Paper might be easier to fold because each layer will be thinner, but it will be less rigid (more like a book cover than a board).

The gap between the cards is important for folding, and folding in two directions adds a little complication. In the first fold direction, you can fan-fold, so the creases just need to be adequate to make a 180° fold (and on alternating faces for what will be mountain and valley folds). It will probably take two or three adjacent scores, each bending a little, to achieve a flat, 180° fold that doesn't quickly fatigue and break.

In the other direction, you're trying to fold many layers. You can fan-fold, but there will be a lot of thickness. Each successive layer of the fold needs to be wider, and the gap between cards in this direction will need to be wider than the gap in the first fold direction. To get the folds to nest and lay flat, you might need to score each successive layer slightly farther apart (by twice the thickness of the sandwich). Also, fan-folding in the first direction means that the scores for the second fold direction need to be on alternating faces for each row of cards. It will take some planning. Fan fold a sheet of paper in one direction, then the other, then reopen it to create a guide for scoring.

For folding, you could use a scoring tool and straight-edge to make several adjacent scores for each fold. You'll need a good embossing surface for scoring the sandwich. A rotary scoring tool (looks like a pizza cutter with a dull edge), would probably do the best job on this. It also might help the folding if you perforate the creases.

Not the answer you're looking for? Browse other questions tagged paper or ask your own question.

3
How to make abstract /marbled designs on a paper?
9
How can I make my own perforated edge?
5
How can I make paper look old without wetting it?
3
Are you supposed to remove the sheets from oil painting pads?
5
A kind of paper where you can pull away the top layer?
2
Make imprinted folds in paper?
5
Can you measure the amount of tooth that a piece of paper has?
4
How to make paper waterproof