How to create a luminescent (glowing) effect with a crystal ball and LEDs?

As part of a DIY electronics project, I want to use LEDs to create a glowing effect with a crystal ball.

I found a perfectly clear crystal ball that looks exactly like this: 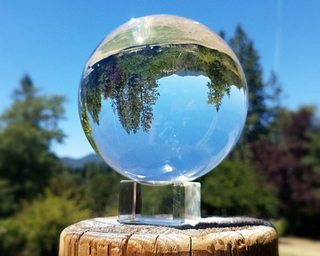 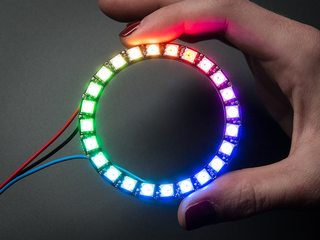 I was hoping to achieve a luminescent effect, i.e. I wanted the ball to glow. A little extra light shining off of the LEDs is fine, it doesn't have to be perfect. However, in my attempts thus far it seems like the light from the LED kind of lights up the surface / sides of the ball, but it doesn't look like the ball is glowing from within. Just the opposite. It looks like the ball is dark and there's a halo around it.

To get that glowing effect, light needs to radiate out in all directions. A perfectly clear ball won't diffuse any of the light entering it. It will act like a lens. Light from the LEDs will pass through and out the opposite side, probably with some refraction, so the LED pattern will look a different size on the top.

You could eliminate the bothersome reflections off the outside by putting the LED ring in a stand that encloses the lights right to the globe.

One idea that might produce the glow effect would be to put a curved diffuser between the globe and stand to scatter the light in all directions entering the globe. If that works, it would let you use the clear globe.

Not the answer you're looking for? Browse other questions tagged lighting electronics or ask your own question.

10
When working in a visual medium, how do I avoid incorrect color?
3
What components, wiring, and electronics needed for helmet internals
2
How does light affect saturation?