Is it possible that the wood used in newer pencils could be a bit better than old ones from same series? Or wood could degrade with time?

I noticed a strange and unexpected thing recently. I never paid attention to details of pencils because I had assumed if a pencil is from a well known brand, they would be consistent for same series.

I bought Faber Castell 5B (12 piece) pencils of 9000 series, which came in a bit old cardboard/hard paper box. Its date of first availability was around 2010 on Amazon. The 12 pencil costed me about 6 USD.

I already have some other pencils like HB to 8B, which were part of a set of 6 pencils, and came in a metallic box. For this question, let's take example of only one, 8B. Its date of first availability was around 2019 on Amazon. 6 pencils also costed me about 6 USD (strange that per pencil price is double here).

8B has a bit different in terms of look and feel of printed text. I mean the information and branding is exactly same for both 5B and 8B. But there are slight differences in thickness of fonts and color of the golden painted ring (which is at the end of pencil).

In case of 8B, the ring was a bit golden color and for 5B it was bit silver like.

For 8B, it was like fresh and bright green (subtle difference, not sure you'd notice in the images) and there was no as such problem of coloring. They look like more finished.

You can see some of the differences in following images: 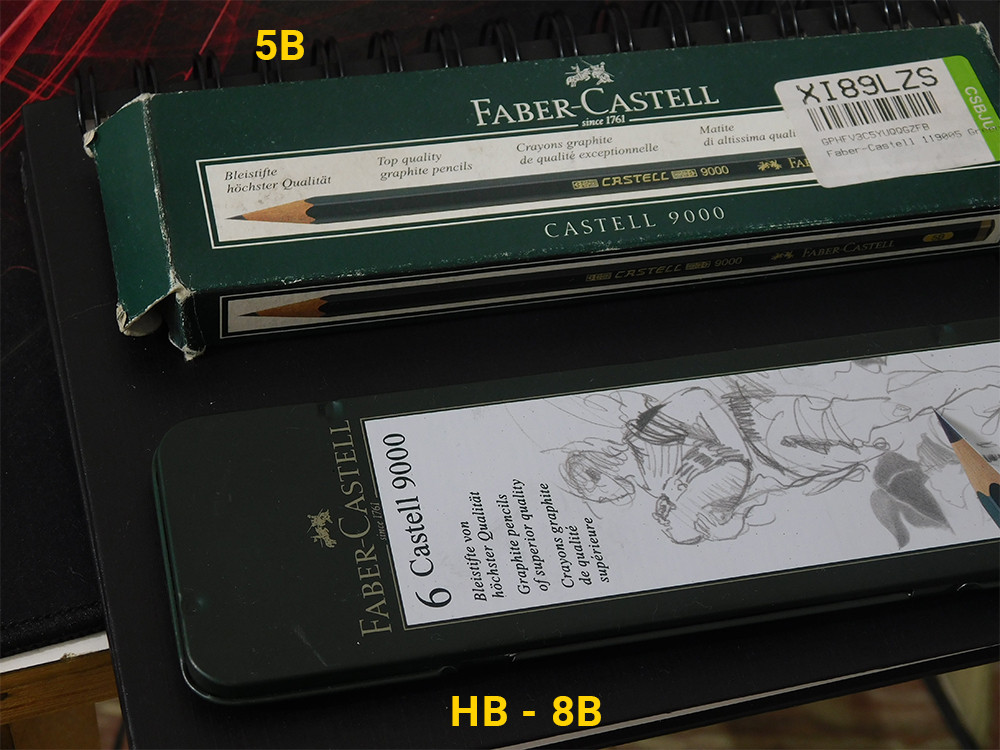 So all these things make me guess that despite having same series, the 5B were manufactured years ago and 8B were manufactured recently. I don't know, but these personal evidences make me really feel so. (I don't have any clear proof so I guess I have no right to make a strict statement on it).

8B felt a bit better when I was sharpening them with sharpener. The wood was a bit whiter than the 5B and smooth too. 5B wood was breaking easily in parts and wasn't smooth. You can notice the difference in following pencils: 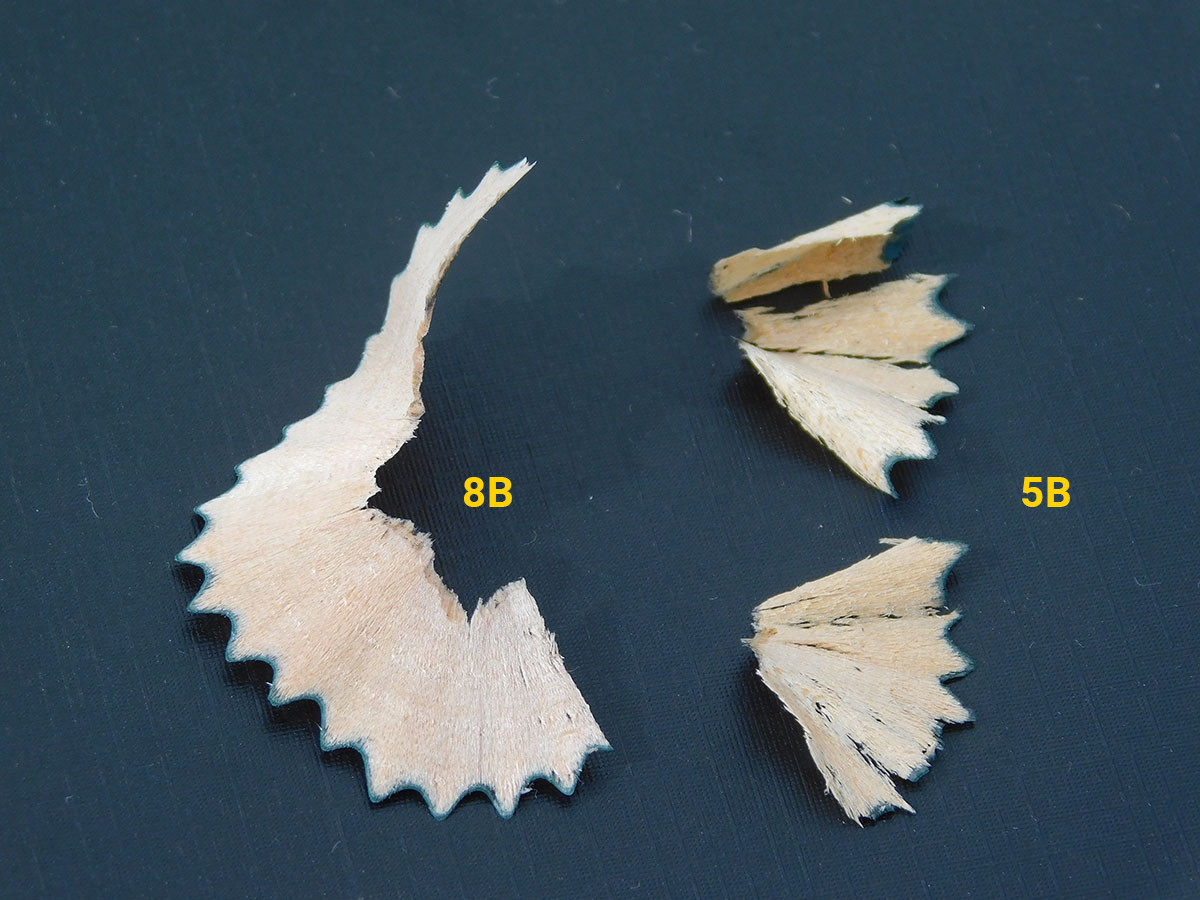 This difference was a bit significant and made me eventually ask this question.

One alternate theory that could explain this is: 5Bs are manufactured locally in my country and it's a duplicate product. But that's highly unlikely. Because I did not notice any problem in working of pencils. Worked just like other grades. Further the reviews on Amazon are excellent for both pencils.

I have to buy 2 or 3 more grades (12 each) and now I'm just thinking if I should go with what's available irrespective of quality of wood. Or if it's actually a quality problem, I would try to find the latest ones somewhere (if I could). So your views would help me know things better.

Like I had said, I had believed that if a pencil is made by well known brand, it would be consistent in terms of quality. But now I'm really curious. If even a well known brand can have manufacturing faults and still end up in market.

So is it possible that with such a time span of manufacturing, say a decade, the wood used in newer ones could be a bit better? Or alternatively, maybe the wood in older pencils turned a bit bad with time?

PS: I have nothing against Faber Castell or any particular brand. It's just I noticed these unexpected wood differences, which were very obvious. So I just want to go into details to know some truth.

My personal experience is that high quality pencils tend to have better quality wood which can be sharpened easily, while cheaper pencils can have varying quality of wood. Sometimes it's pure chance how hard or soft the wood is and you can have very different wood in the same batch of pencils and sometimes even in the same pencil.

Here's a short video about how pencils are made.

You see that the manufacturing begins with wood slats in which 6 grooves for 6 leads are cut. The machine glues a second grooved slat on top of the first and cuts the 6 pencils from each slat.

Among the things that can influence how well a sharpener can cut the wood are:

Here's the result of my little experiment:

First: 3 pencils sharpened by a hand crank sharpener. You can clearly see wood grain in the first one. The 2 yellow ones are from the same package and of same age. 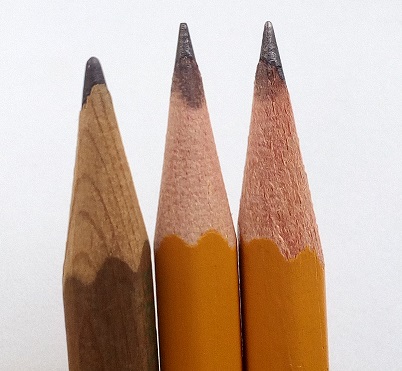 Second: the same pencils tortured sharpened with an old, blunt sharpener. The first one ripped where the sharpener had to cut against the grain of the wood. The second one is still the smoothest and the shaving is completely intact. The third one clearly shows fraying where the wood isn't as dense and the shaving has holes along the tip. 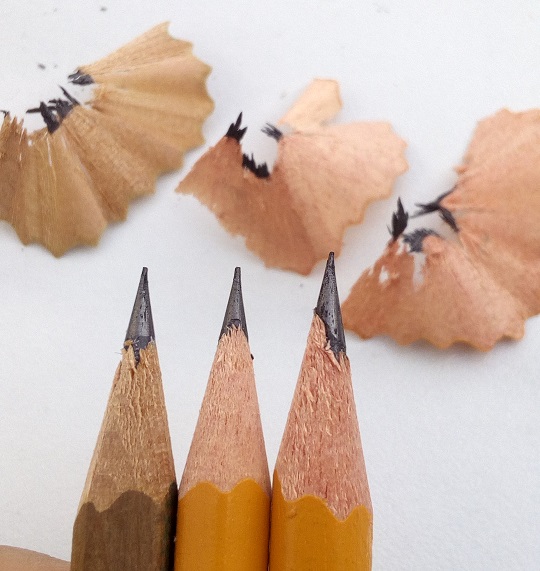 Since you're asking about the specifics of a brand, I took a long and enjoyable dive into some of the information that is quite readily available.

As Stephie mentioned in the comments on the question you raised on Meta, it is likely that products available in different countries were manufactured in different factories.
Furthermore, any self-respecting brand would want to improve the quality of their materials when and where they can. But availability, changing regulations, and changing costs will also have an influence on the final product (as an example, in 2001 Faber-Castell started painting their pencils using a water-based paint instead of a solvent-based (aceton) one because of health- and environmental reasons (and, not unimportantly, to keep being able to produce in Germany).1 Changes in manufacturing can also account for the subtle difference in colour, but so can time and storage).


Faber-Castell has 16 different manufacturing plants. Most of these specialize in a certain type of product.2 (See also [here][3].)

The sources of the wood used for production have changed throughout the years. Originally it seems only cedar wood was used6, but, throughout the decades, manufacturing plants have been established in different locations around the world, undoubtedly resulting in at least slightly different consistencies of wood in similar products (if of the same type at all).

According to the FSC website, the plantations owned by Faber-Castell apparently produce wood of the following species for pencils:

The main species used for pencil production seem to be the Californian cedar and the Brazilian pine:

The author of Polar Pencil Pusher is similarly at a loss here to what the exact type of wood used is:

"The species of wood used for the Castell 9000 is a mystery to me. It doesn’t look or smell like cedar, the “default” for high-end pencils. It doesn’t actually smell like much of anything. The literature from Faber-Castell indicates only that they are made of solid wood that is cultivated for that purpose in Colombia. I have heard rumors on the internet that it’s pine; I’d buy that, but can’t say for certain."

Something else noteworthy here is that the wood of the pencils in the pictures of that article is similar to that of your 8B pencil.


In your image comparing the shafts of the 5B and 8B pencils, you can clearly see the 5B wood has a coarser texture, resulting in a higher chance of a sharpener getting caught up in the wood and having to use more power which in turn increases the chances of the lead breaking. This difference could indeed be due to age, but I doubt the structure (the size of the fibers) could change so much throughout a decade.

Based on all this information, I think the two pencils have indeed been made of different kinds of wood.

Also, I'm assuming the silver line on the tip of the pencil, which used to be golden, is something relatively new, based on date-restricted image searches (like this one). I don't know exactly what year these got switched, but likely somewhere in the early 2010's.

1: Global Business - Quick on the Draw, on BCC Sounds.
But they state in their Product Knowledge Manual (see Source #2) that they're "the only company to consistently use environmentally friendly water-based paint in its European pencil production", which means at least that they use different production standards for this aspect of their products, something that only enforces the idea that other materials might also very well differ between manufacturing locations.

5: 'From Pine to Pencil', article on faber-castell.eu.

0
Why aren't there mechanical pastel pencils?
0
Are there any pros and cons of using more than 5-6 grades of pencils for a single drawing especially a portrait?