Are all ruffles gathered, or are there different types of non-gathered ruffles?

Are all ruffles gathered, or are there different types of non-gathered ruffles? I am new to sewing and I was wondering if all ruffles are gathered or not. By ruffles, I mean the ruffles we often see in skirts and other female pieces of clothing.

There are many ways to make ruffles, but some of them are out of fashion now. Ruffles went through several hundred years of development and changing fashion, and sometimes went by different names, depending on the construction method and where they were attached to the garment.

The most common ruffle (today) is a long strip of fabric that is gathered along one long side. Stephie has already listed various ways how to create them. Pro tip: If you sew 2 gathering stitches in parallel and pull both of them, the ruffle will be neater and easier to attach to the straight fabric.

If you sew your gathering line in the middle of the strip of fabric, you end up with a double ruffle or frill. 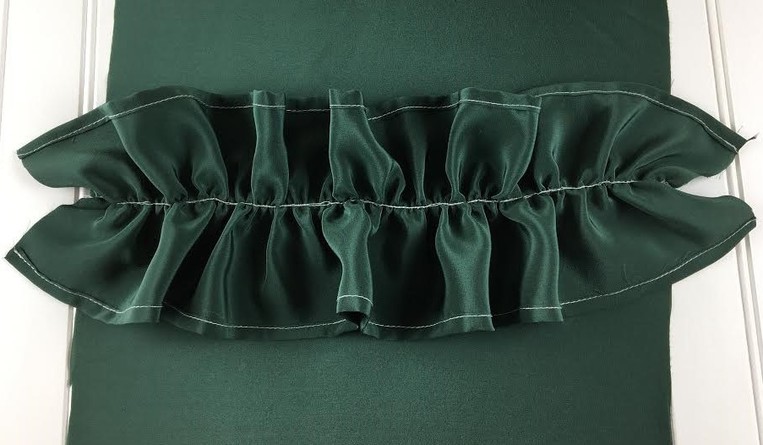 A ruffle that is not gathered can be achieved by cutting a big circle, spiral or halfmoon shape from fabric and sewing the inner edge in a straight line to the piece of clothing. Since the inner circumference is smaller than the outer one, the fabric is longer on the outer edge and falls in waves. Technically this is called a flounce or circular ruffle. 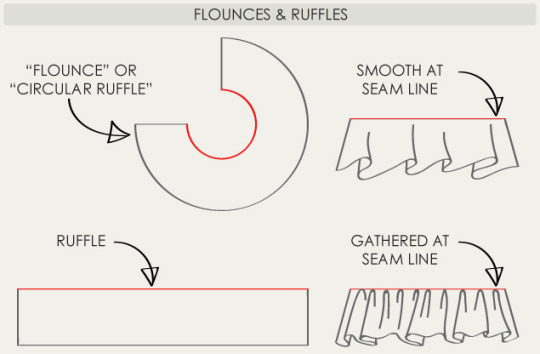 You can achieve a very similar effect with knit fabrics. Knits like jersey are stretchy, so by stretching the edge of the fabric while hemming it, you automatically create a ruffle.

To create a jersey frill, cut a long strip and stretch the fabric along the short width while feeding it into your machine. This automatically gathers the center of the strip. Have a look at this video tutorial.

Historically, there were also pleated ruffles, but they are not very common anymore. Knife pleated ruffles can be made relatively easily on a sewing machine and there are even special sewing foots that automatically pleat the fabric while it's sewn. Box pleated ruffles are a little harder to make because (as far as I know) there's no way to automate the pleating (at least not for a hobby sewer). Often these are simply called pleats. 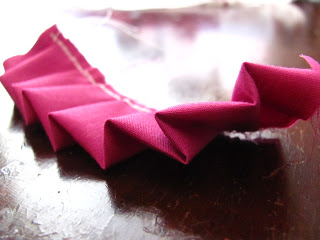 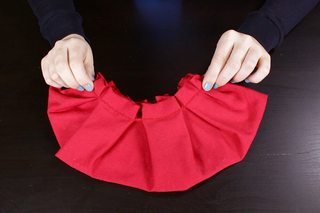 As with the gathered ruffle, you can move the gathering line to the center of the fabric to get pleated frills.

One very special way of pleating is the cartridge pleat, which is most prominently seen in historical ruff collars. If you make your pleats very small and tight, you end up with a ruffle that stands perpendicular to the fabric it's sewn to (if it's sewn in the correct way). 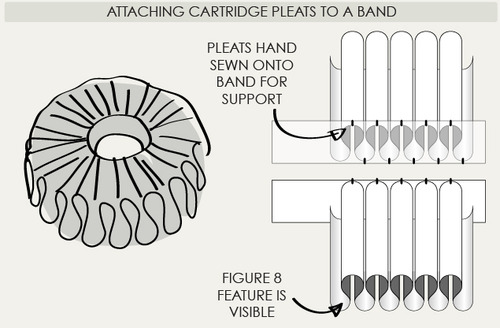 That might depend a bit on your definition, but generally I’d say no:

For sewing there are a few common ways to make ruffles:

You may consider these all as versions of “gathering”.

In any case, a ruffle is created by changing the respective lengths of fabric - either by joining a longer (-> gathered) and a shorter piece or by contracting a central part for a double-edged ruffle.

A completely different approach can be done with other techniques like crochet - creating ruffles by effectively making more stitches than would fit if the piece were flat, so that the result bunches up in ruffles.

9
What kind of stitch makes up t-shirt seams on commercial grade clothing?
10
How do I determine what size zig-zag stitch to use?
16
What criteria should I be considering when looking at a second hand sewing machine?
8
What happened to slant-needle sewing machines?
6
Efficient cutting and preparation of fabric for sewing clothing
4
Advice on sewing bandages?
6
Fasteners other than Hook and Loop
5
How do I attach the back of sheets of paper when layflat binding a book?
2
Are these fabric scissors?
9
Why are needles designed for sewing thick canvas or heavy leather three-edged?